The Rowley Shoals is one of the most remote dive locations in Australia with trips only available around October each year. We sent photographer team Scott Portelli and Rosie Leaney on assignment to find out what makes it so very special. Here’s what Rosie has to say about her experience:

Imagine being in the open ocean, hundreds of kilometres from land, in the centre of a coral atoll which rises to the surface from 400 metres.  Apart from the encircling shallow reefs, there’s nothing else but deep blue ocean.  Welcome to the Rowley Shoals Marine Park.

It was hard to believe that nearly 300km from the protection of land, the ocean was dead calm, with only a few ripples from the warm breeze. But the calm surface belies the power of the tides that pour in and out of the oval-shaped atoll each day. Funnelled through a few small channels, the tides gather tremendous speed, which makes for some truly adrenalin-filled drifts.

There is a constant sense of remoteness at Rowley Shoals. The three pristine coral atolls lie alone in the Indian Ocean. Life here is governed by the extreme tides, which pour in and out of the oval-shaped atolls via narrow natural channels, creating racing currents. Much of the diving is done on the outside of the atoll, where the walls plunge down into 50-400m depth, and also drifting through the channels. The drifts can be gentle, or swift, depending on the state of the tide, and the water is a very comfortable 27-28C.

The Rowley Shoals is a group of three coral atolls south of the Timor Sea, about 260 km west of Broome on the north-western Australian coast, on the edge of one of the widest continental shelves in the world. Hence you can only dive the Rowley Shoals by liveaboard. Liveaboards depart from Broome, with flights from most capital cities via Perth.

The region has one of the shortest dive seasons in the world running only from late-September through early-November, meaning fewer than 200 people dive this isolated and pristine location each year.

Top Tip: because the season is so short, spots on the Rowley Shoals liveaboards quickly get booked up. It pays to plan ahead and book at least a year in advance. Diving Rowley Shoals: What to Expect

Rowley Shoals is very biodiverse, with more than 200 species of coral and 700 species of fish, many of which do not live close to shore. Residents of the reefs include coral trout, clownfish, humphead parrotfish, Maori wrasse, Spanish mackerel, giant potato cod, dogtooth tuna and green turtles. Scott Portelli describes Rowley Shoals dive sites.

We spent four days diving Clerke Atoll, over half the week-long liveaboard trip, and you’ll see why – with such an abundance and diversity of dive sites. Clerke Aquarium was our first dive, a check-out dive in a shallow, protected area inside the atoll.  Here we got a feel for our new environment, navigating around the base of a large bommie in 12m depth. Large hard corals dominated, although many had been “flattened” by the strong tides, and on the white sand surrounding the bommie, there were thick forests of staghorn. There were plenty of reef fish darting around, including a beautiful bright yellow trumpetfish hunting through the coral. This was our first venture to the outside edge of the atoll, and…. WOW! We jumped off the boat into clear blue water, and immediately noticed the pristine condition of the corals. The reef sloped down to a wall, then dropped off onto the blue, to 50m.  We descended onto the wall, careful not to lose track of depth, as can easily be done in clear sunlit water. A kaleidoscope of colourful coral grows out from the wall, including bright red gorgonian fans, yellow plate corals, and fuchsia-pink soft corals. On our way back up the reef, we explored shallower gutters whilst doing our safety stops, with white-tip reef sharks resting on the sandy floors. On this exciting drift snorkel, as soon as we jumped in the water, the current tugged us away from the boat. We were drifting from the outside of the atoll, through the channel, to the inside of the atoll (preferable to drifting out of the atoll, out to sea!) With the incoming tide bringing in clear oceanic waters, the visibility was great, a good 20 to 30m. The walls of the channel were lined with coral and we could see schools of snapper sheltering under coral outcrops and schools of huge bumphead parrotfish chomping loudly on the coral. We continued drifting fast through the channel – no need to kick, just relax and go with the flow – until getting pushed out into the inside of the atoll, where we slowed gently as the current dissipated. We were picked up by the boat and dropped again into a narrower channel to repeat the ride. A relatively shallow dive (12M), where the reef is full of tunnels, gutters and caves.  Light beams penetrated through holes in the cave ceilings and a school of trevally circled around the beams, a really picturesque dive. One of the larger cave entrances was framed with an array of red gorgonian fans – really beautiful view to sit in the cave and look out as Trevally circled the entrance. For this dive, we were dropped into the channel to drift outwards towards the edge of the atoll. This was one of the fastest drifts we have ever done! There was no other option but to surrender to the tide, and zoom past the coral bommies, past the schools of sweetlips, bumphead parrotfish, and white-tip reef sharks. It was so much fun! When we got spat out of the channel exit, we were at the site “Coral Gardens”, where we slowed to a gentle drift along a colourful wall (which dropped down to 50m+). Large grey puffer fish made use of the coral outcrops to lie and be cleaned by smaller wrasse and cod stopped with their mouths wide open for the tiny wrasse to pick scraps from their teeth. This was such a relaxing second half of the dive after the “adrenalin drift”. The max depth we did was 23m. Blue Lagoon is a spectacular site.  There are multiple lagoons with white corral-rubble floors at 8-12m, enclosed by sheer walls of coral. There was abundant fish life, including anemonefish, a large school of trevally, white tip reef sharks.  After the dive, we were allowed to drift with the current all the way back to the “mother-ship” Reef Prince, instead of being driven back the usual way in the dive tender. This dive is named after its cupcake-shaped coral bommies, but the main portion of the site we did was a stunning gradual sloping reef that disappears into the depths. As on all the sites here, there were large healthy corals and abundant reef fish life. Early on in the dive, we spotted a curious batfish, who swam over to us. Somehow, the other batfish in the area got wind of this, and we ended up with four more batfish joining us. For reasons only known to them, they wanted to be close to us throughout the rest of our dive. It’s always special when a wild animal is so curious. The maximum depth we went to was 23m, although the reef sloped off into 50m. This wall was, again, covered in wonderfully healthy and colourful corals and sloped steeply into the dark blue depths. There were so many tiny schooling fish around the corals here, that sparkled and flashed in the sun, as they flitted around. It was like each coral fan had its own light show going on. A large octopus crawled over the coral heads, in and out of holes, with a cod following close by. We wondered if they were hunting together, as showcased in David Attenborough’s Blue Planet II. As with most of the dives we could pick our depth (the wall descends from the shallows to 50m+), but we dived in the 5-20m range as there was so much to see here. After winding through coral bommies in the shallows, we reached a white sandy expanse that sloped off onto the deep. All over the sand at 20m depth, were hundreds of little garden eels poking their bodies above the sand. On our safety stop, on a sandy patch underneath the boat, there sat an extraordinary looking “porcupine stingray”.  As expected from the name, it was covered in spikes. This dive site gently slopes, then plunges down to 50m. At 20m, we could look down and see the sandy sea floor, the water was so clear. Although the corals are vibrant and colourful as usual, the highlight on this dive was two large (50cm) cuttlefish courting in the shallows.

Mermaid Atoll is a three-hour steam north of Clerke Atoll, and while we didn’t spend as much time here, the dive sites were spectacular and a great place to end a great week of diving. Even though there are no longer any giant potato cod here, this dive was the best of the week! The Cod(less) Hole is like a cauldron – coral walls and white sandy base – churning with massive bumphead parrotfish, reef sharks, barracuda and trevally. There was a lot of action on this dive, just watching the fish swirl around us was incredible.  Then the currents picked up suddenly and the dive turned into a fast drift, through gutters leading back towards the boat. On the drift, there were more bumphead parrotfish, white tip reef sharks and a nurse shark laying on the sand. At Mermaid atoll, the drop-offs are deeper, with a sheer wall of coral plunging down 400m. Of all the walls we dived, this was the most vibrant and colourful. The wall is covered in large red gorgonian fans and bright pink soft corals sprouting out between myriad hard coral formations. Grey reef sharks circled in the dark blue below us as we drifted gently along the wall and trevally glided over our heads. It was one of those dives you really don’t want to end. 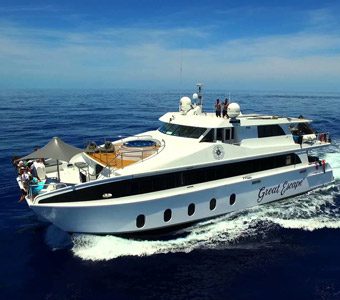 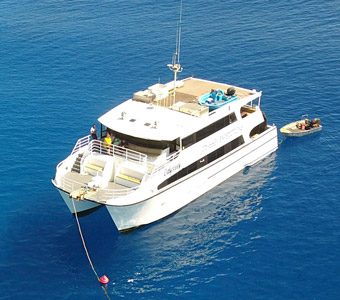 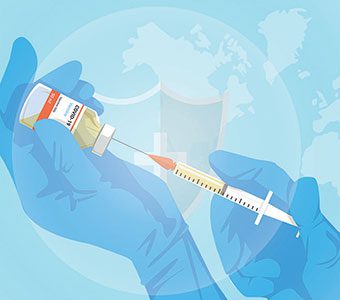 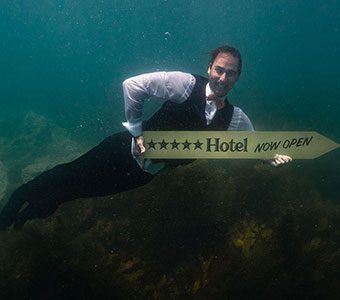