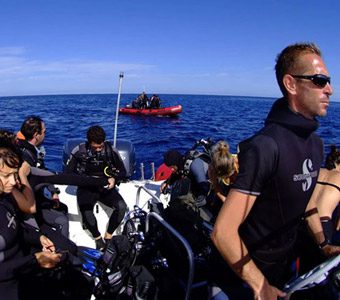 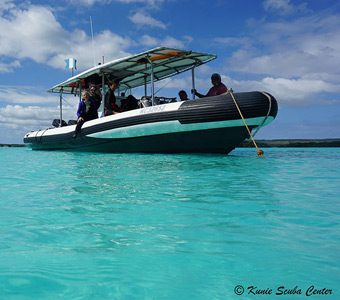 The New Caledonian Barrier Reef, the world’s second largest barrier reef encircles a 24,000 square kilometre UNESCO World Heritage-listed lagoon, and along the coral walls, channels and inside the lagoons, over a hundred dive sites. Some of the best diving in New Caledonia can be found in the enormous South Lagoon, easily accessed from the capital city of Noumea.

Dive sites are suitable for both beginners and advanced divers; expect clear waters and plentiful marine life including large pelagic fish species, dugongs, sharks, manta rays and macro life. There are also a few shipwrecks, caverns and exhilarating drift dives along channels such as the Dumbea Passage. In short, the best diving in New Caledonia offers something for everyone. One of the more easily accessible islands is the Isle of Pines on the southern tip of the main island, accessed by short 30-minute flight or 2-hour ferry ride from Noumea. The fringing reefs here offer varied extremely varied diving experiences, some feature forests of colourful sea fans, others feature canyons and swim throughs, all are teeming with colourful reef fish as well as large marine creatures including reef sharks, turtles and rays.

There is great diving also in the Loyalty Islands off the East Coast of the main island; Ouvea, Lifou and Mare. New Caledonia is in the southern Pacific Ocean, south west of Vanuatu, a three-hour flight from Sydney on Australia’s east coast, and three hours also from Auckland, New Zealand.

The water temperature varies from 22 to 26°C from May to September and from 27 to 30°C from October to April. Divers will need a 3mm to 7mm wetsuit, depending on the time of year and cold tolerance. Visibility is usually good, though can vary from 10 to 30 m. There’s good diving year-round, but March through September offer the best chance to spot mantas and sharks. Groupers aggregate to mate in Dumbea Passage in late November/early December.

May to October is the dry season, and December to March is rainy season, with shoulder months hot and humid but not necessarily rainy. Temperature in dry season ranges from 19 to 28°C, with August the coldest month (19°C to 25°C). In the rainy season, temperatures vary from 24°C to 31°C, February being the hottest month of the year.

In Noumea and elsewhere on the main island, or Grande Terre, you’ll need to make your own way to the dive shop which is located at the marina, either by taxi (or Uber), or you can hire a car or minibus (with driver) if you are travelling as a group. To explore Noumea’s above water attractions, there is a coastal walkway linking most of the city’s beaches and a public bus service.

On the islands, including the Isle of Pines, either your hotel or the dive centre will organise transfers to and from the airport and dive centre.

This is in fact three dive sites in one. On one side of the channel, a site called Canyon Fossil has varied and abundant life, with giant gorgonian sea fans. In season, the channel itself plays host to hundreds of groupers that aggregate in small caverns during their mating season. On the opposite side of the channel at M’Bere Reef, there’s abundant fish life alongside black corals, steep canyons and a large World War II submarine mine. You’ll very likely see sharks, including grey reefs, whitetips, leopard sharks, hammerheads and blacktips.

There are lots of grey reef sharks in June and the groupers lay their eggs during November and December. You’ll find the groupers in caverns at about 13 m. The dives are often drift dives with reasonable currents and are suitable for experienced divers.

Amédée Island is a 45-minute boat ride across the lagoon. There are 10 dive sites to explore here, all within 20 minutes of the island. Some of the best include the Dieppoise and Toho 5 shipwrecks. A French warship sunk in 1988, the Dieppoise is home to barracudas, nudibranchs and jacks. The interior of the ship, with dining tables and chairs, is clearly visible and you can swim through the pilot house. The Toho 5, a Japanese long liner sunk in 2000, is already home to groupers and jacks. The Dieppoise and Toho 5 are both at a depth of 85 feet (26 m).

Near Amadee Island, Boulari Passe, on the outer reef, is famous for its manta rays and other large pelagic species. You may see humpback whales from July through September.

The Boulari Pass averages around 15 m, with a maximum dive depth of 30 m. Dives from Amédée Island are suitable for both novice and experienced divers.

From Prony Bay you can see the remains of Prony Village, a former penal settlement, along one of the inlets, nearby waterfalls, banyan forests and hot springs. The hot springs have created a tall pinnacle, the Prony Needle, which rises 40 m from the ocean floor to just two metres below the surface. Expect to see plentiful corals, scorpionfish, macro life and a variety of reef fish. Spanish dancers are visible at night and if you’re very lucky, you might spot a nautilus.

Average dive depth is 25 m and those with time for a second dive should consider drift diving the Canal Woodin, where you can sometimes spot whales and sharks.

A series of deep fissures that penetrate the top of the coral reef, creating grottoes and canyons, Garden of Eden begins at a depth of about 11 m with a maximum depth 45 m.   With visibility at 30 meters most of the time, it features tunnels and swim-throughs teeming with reef fish and crustaceans, the garden features a wealth of hard corals and soft coral alike. Here, you may encounter grey reef sharks, along with banded sea snakes, yellow box fish and densely packed schools of glassfish and anthias.

The coral walls drop to around 45m with average depth of 15 to 20 m. As you ascend, you may be led through a chimney which starts at 14 m and brings you back up to the reef top.