The lush green hillsides and low mountainous terrain surrounding Kimbe Bay hints at what lies below its blue surface: the bay is dotted with tall seamounts, some breaking the surface as an island, some just breaking the surface as a coral reef and others falling short yet still providing a perfect pinnacle for coral growth, sea life habitat and a dive site. 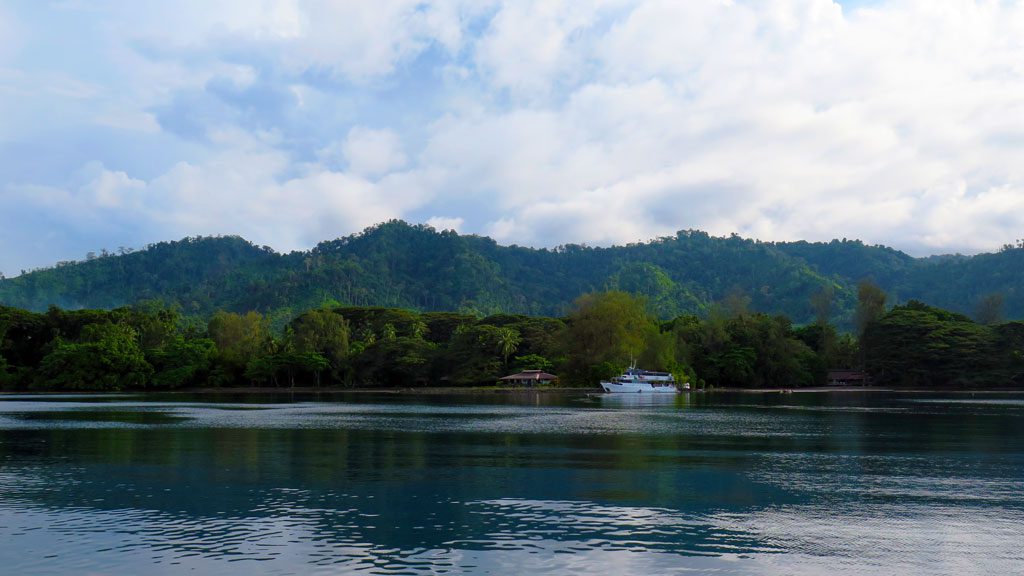 On our first dive from Walindi Resort, the excitement grows as we kit up in the spacious boat directly above Inglis Shoal, one such seamount in the north-west of the bay. Yesterday’s divers had experienced exactly what we were hoping to see, a tornado of barracuda in the clear waters above the mount. 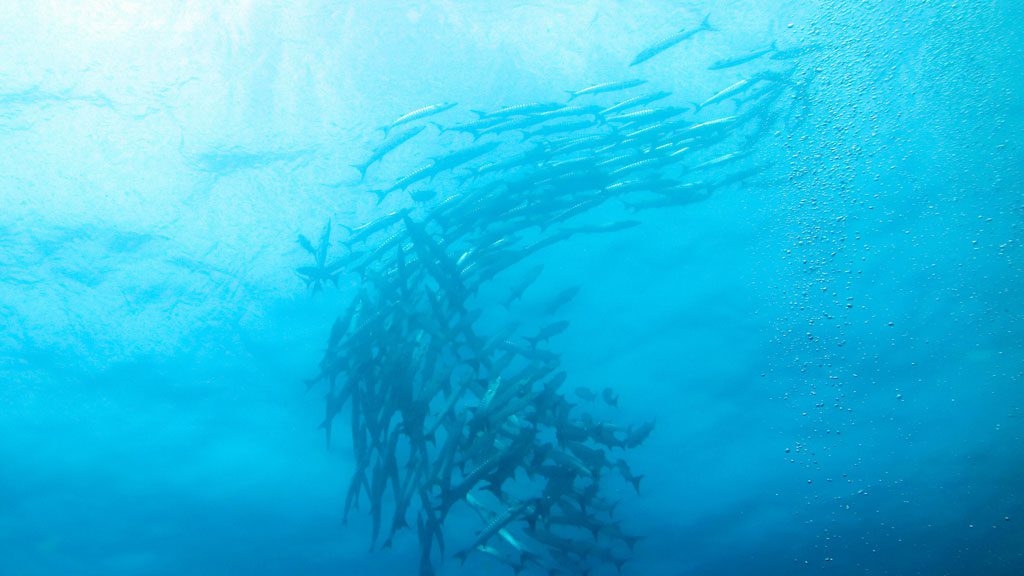 As we drop in and descend to the flattish top with a small undulating saddle, we’re wondering whether we had missed the show, but soon get too engrossed in what the seamount has to offer to care. It’s covered in corals, sponges, sea anemones and corallimorphs, and attracts a lot of the mid-sized marine life from snapper to triggers, and batfish to flurries of fusiliers.

Playing hide and seek with the juvenile white tipped reefy (him doing the hiding and me doing the seeking) I miss the arrival of the barracuda, and they are already circulating as I make my way the 30 metres across the top of the mount, by which time the photographers have swarmed the swarm and the barracuda have gone. 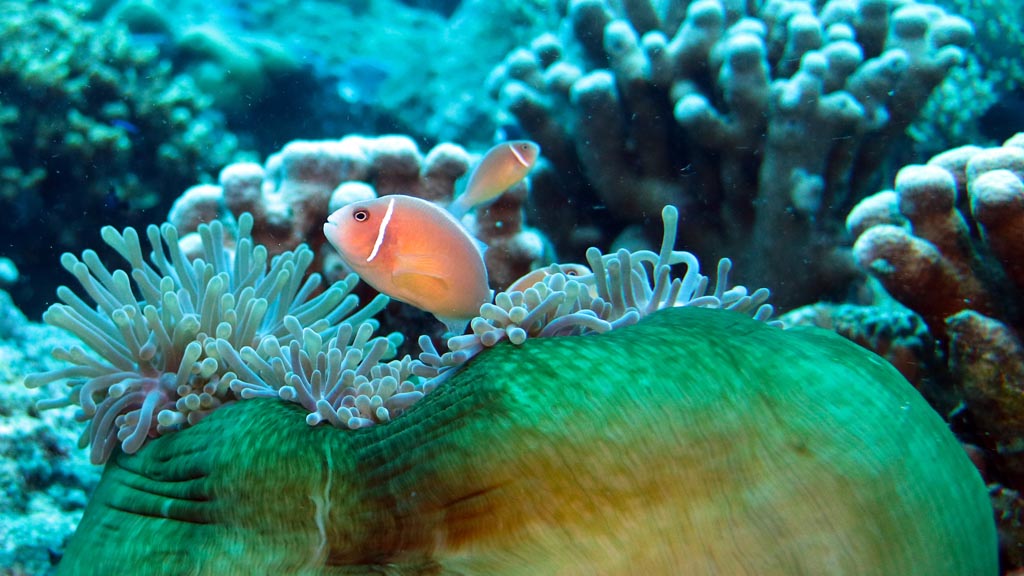 Still, the top of the mount has innumerable cleaning stations, so I decide to hang there and watch the reef society go about their daily business. Of course, just as were about to call the dive the barracuda come back around and this time stream in a straight line right over the top of the seamount, through the saddle and disappear into the big blue beyond.

Our second dive is on a seamount that just breaks the surface called Otto’s Point. Usually the point of a reef is the corner where the current converges or diverges and Otto (whoever he was) named this one particularly well. On the currenty side, a coral clad slope drops steeply to 40 m where we see the pelagics patrolling the point proper below. 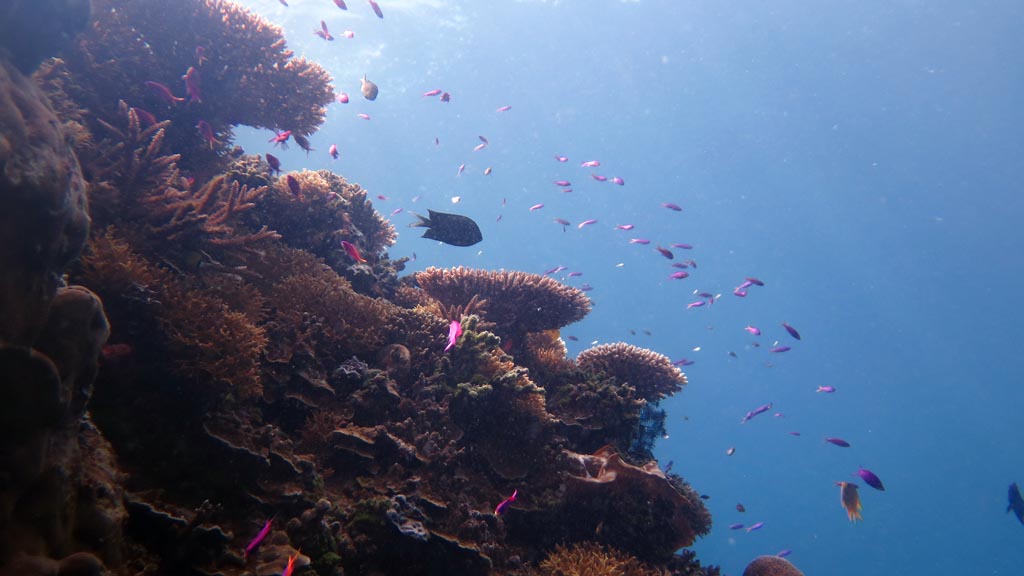 Turning around the point to the sheltered side we spend the whole dive on a near vertical wall, coral clad and swarming with colourful anthias to 10 m then sponge clad from there with no end of nudibranchs and sea stars amongst the nooks and crannies of the wall colourful wall. 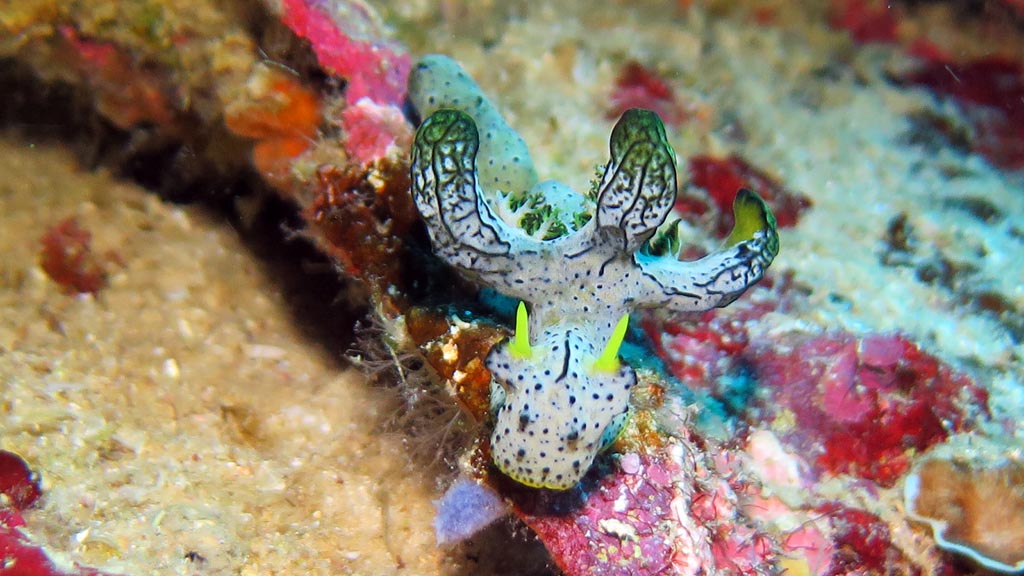 After what can only be described as a “proper lunch”, including chicken drumsticks, fish balls and a variety of salads followed by coffee and cake, we head over to the bottom west corner of the bay for our final treat: the Zero. Discovered only recently, judging by its position just 100 m from shore, and its orientation, it looks like the plane didn’t quite have the height to make the runway and so was put down gently on the ocean within a short swim to shore. 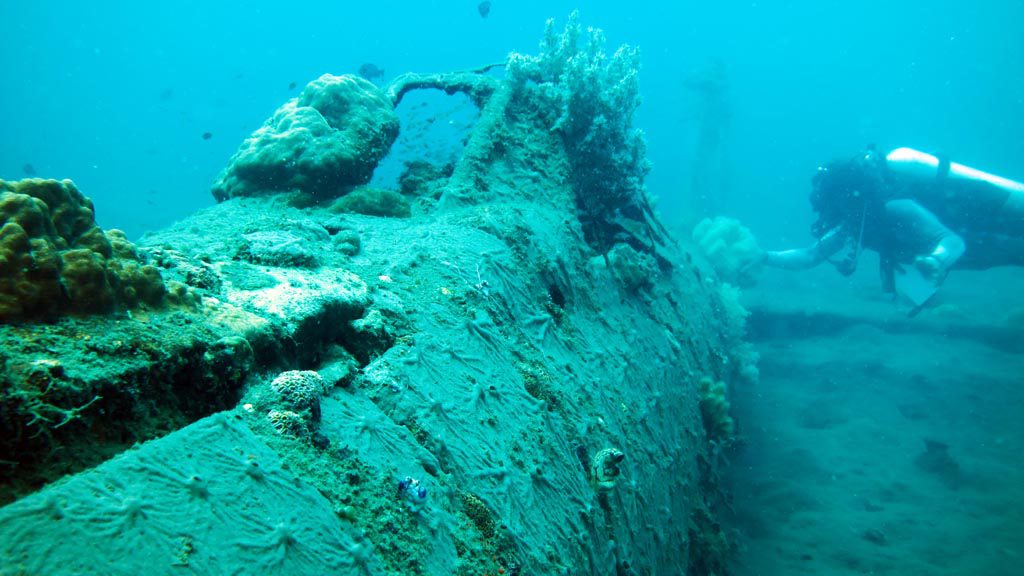 Parked upright, intact and facing the shore, the plane is now a small artificial reef about 80m from another small natural reef closer to shore in the shallows. It’s covered in the same sea life: anemones, soft corals, algae and a strange coating sponge which has covered its large flat surfaces with a regular geometrical pattern. 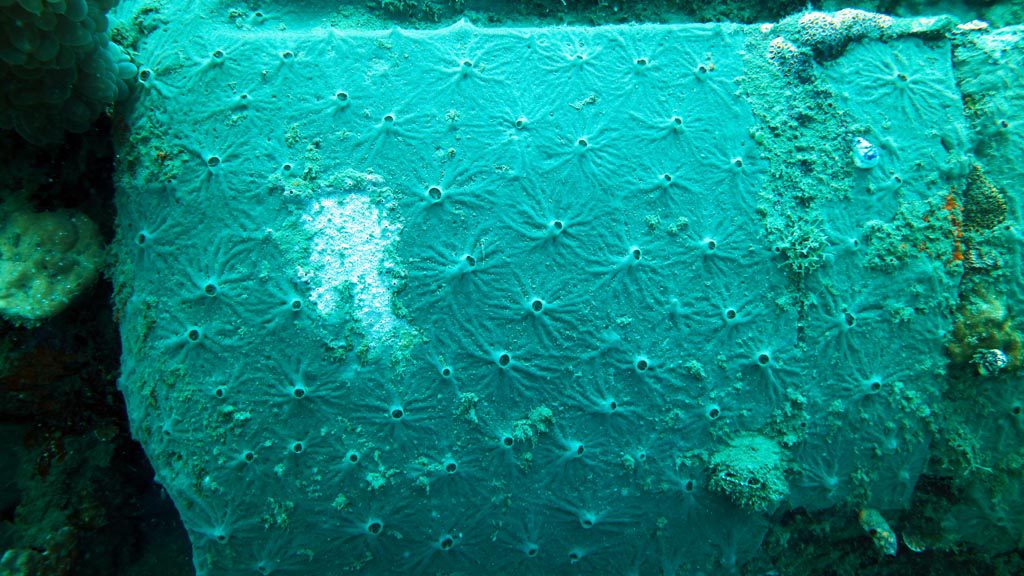 Kimbe Bay has dozens of dive sites amongst the seamounts, pinnacles, reefs and islands dotted around the bay, and Walindi Resort is the perfect place from which to dive them. Departing from the well-equipped dive centre its three boats offer two and three dive trips each day. In a whole week you will never need to dive the same site twice – though you’ll definitely want to! 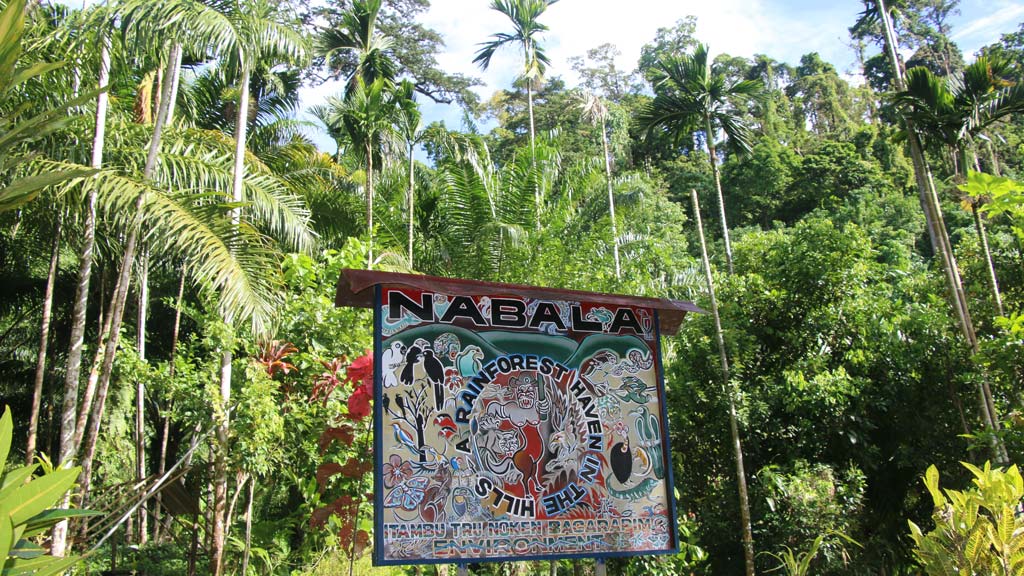 Walindi Resort is set in tropical garden grounds and provides a small oasis of comfort in PNG’s rugged and undeveloped landscape. There’s plenty more to do aside from the diving too. Though much of the landscape that was coconut plantation has given way to sustainable palm oil, there are pockets of native bush full of birds, including the iconic hornbill. Your non-dive day can be spent bird watching, followed by a visit to the hot springs (with cold beers) and rounded out with a visit to the local village and school (funded by Walindi Resort), full of smiling kids. 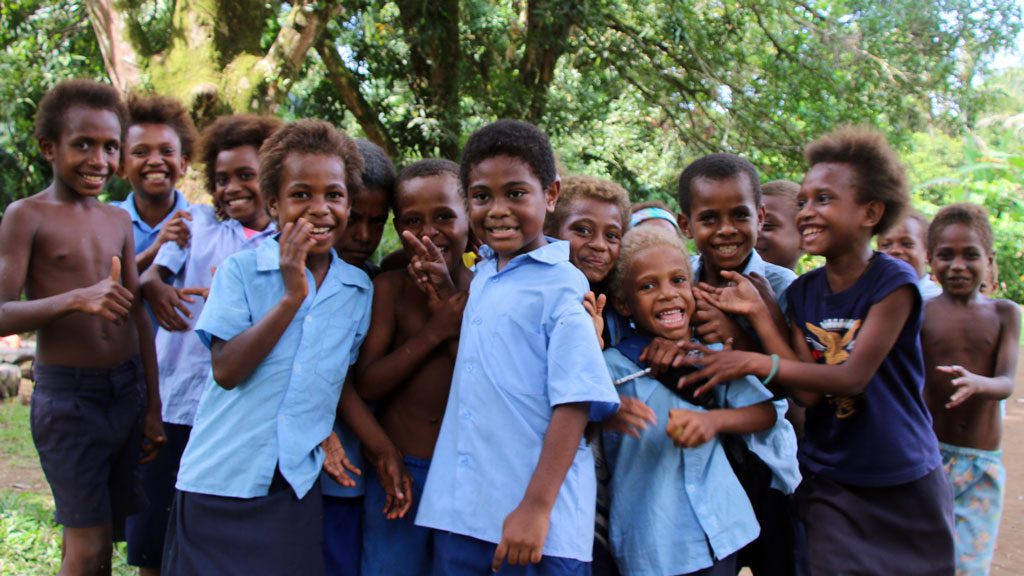 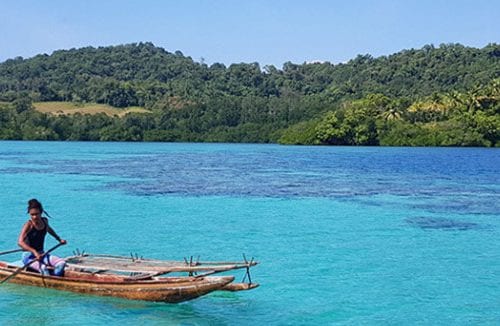 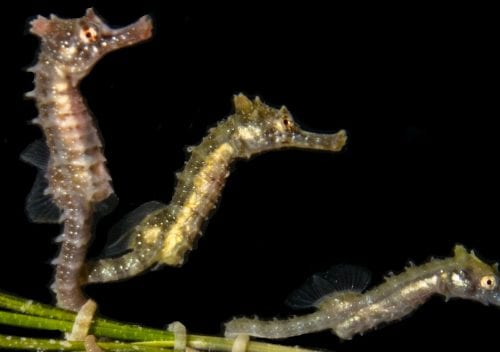 The Australasia Underwater Photographer of the Year