It’s one of those places where the more time you spend there – the more it grows on you.

Returning to Gizo two years after my last visit, for this year’s Solomons Dive Fest, the first impression is that it still looks rough: the street from the wharf is lined with betel nut vendors and the muddy pot-holed road is splattered with red stains. But look beyond that and there’s a certain charm to the place and it slowly grows on you again. Not sure whether that’s a friendly faces at Dive Gizo, the cold beer at the PT 109 Bar, or the fact that there’s families enjoying wood fired pizzas at the Gizo hotel. 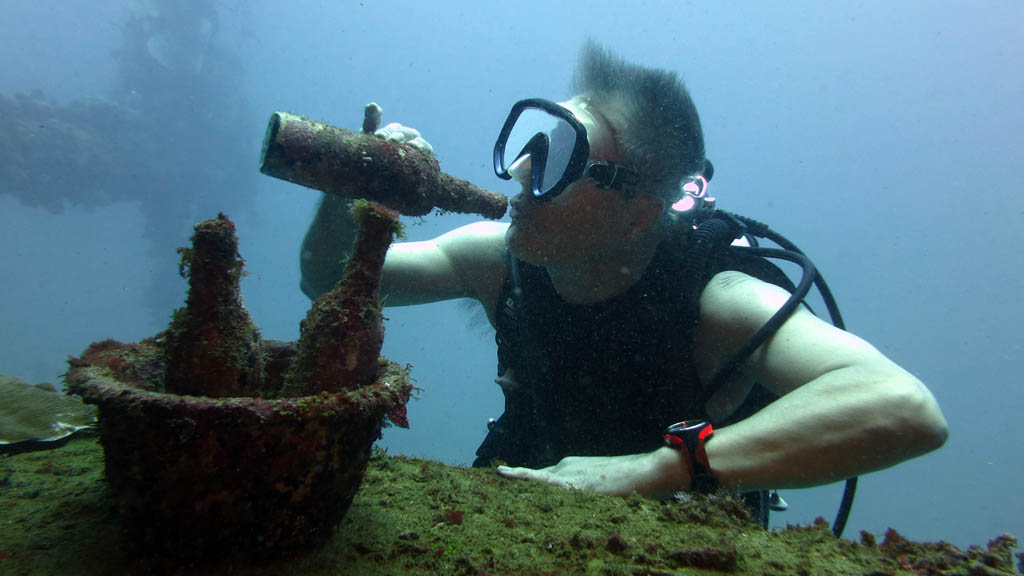 Here for Dive Fest 2017, we are staying at the Rekona Lodge. Though basic, the aircon works, breakfast is a generous omelette with a big mug of coffee delivered to your room and we have a balcony – perfect for watching the sunrise and drying the dive gear.

Diving with Dive Gizo was just as I remembered it – only better! Danny and Kerry run a really slick operation, processing 12 divers (on their first day) through the shop and into their two covered waiting boats in no time at all. 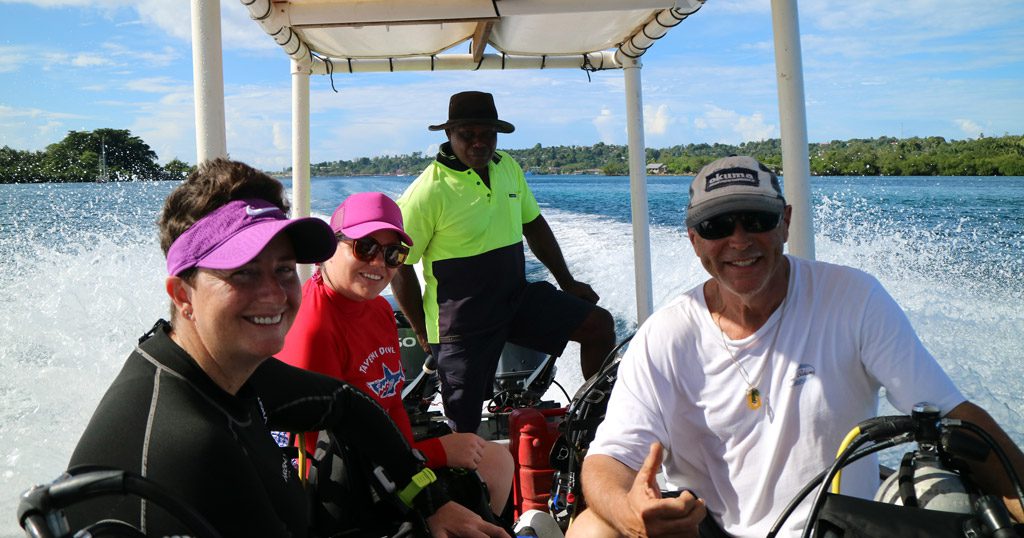 We have three dives ahead of us as we speed out to Kololuca Island home of the Toa Maru, and nearby Jnari Island home to Grand Central.

The Toa Maru was very different from how I remembered it, possibly because this time we dived it twice. The first dive being the orientation dive, taking us passed the huge King posts deep down to machine-gun in the sand at the stern, but then up and along the deck rails all the way to the bow and finally doubling back over the deck which is now a coral reef, and passed the two bomb holes. 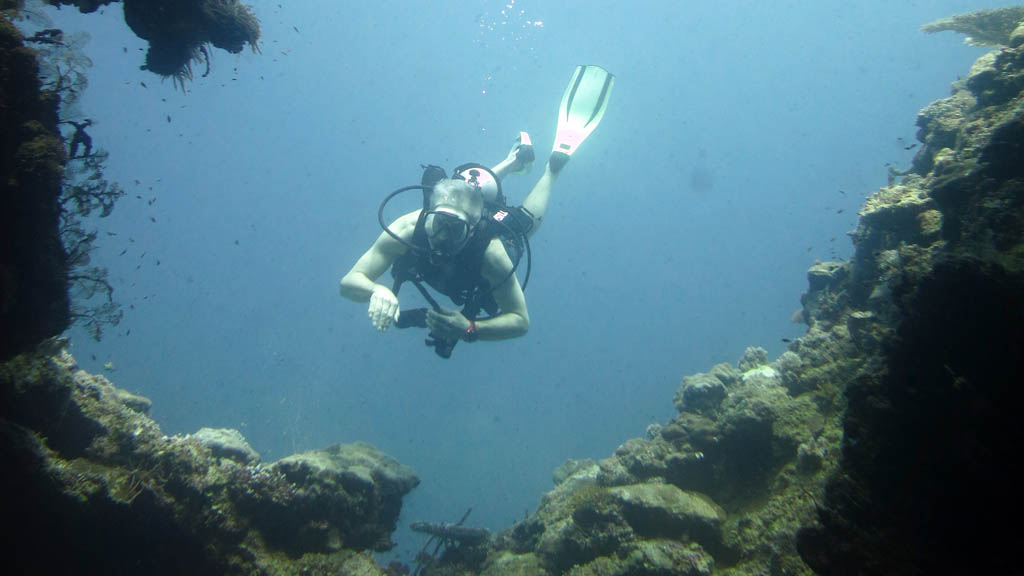 The first one delivered by an American destroyer that you could drive a bus through, and the second one created by salvagers – using salvaged munitions – trying to get into the hold.

The second dive was much more fun, as the bridge has completely collapsed the holds are wide open and you can traverse from one to the next working your way right through the middle of the ship from stern to bow. Though there are a few cables to beware of, but there’s no feeling of confinement and no need to get close to the floor or walls so there’s no impact of visibility. 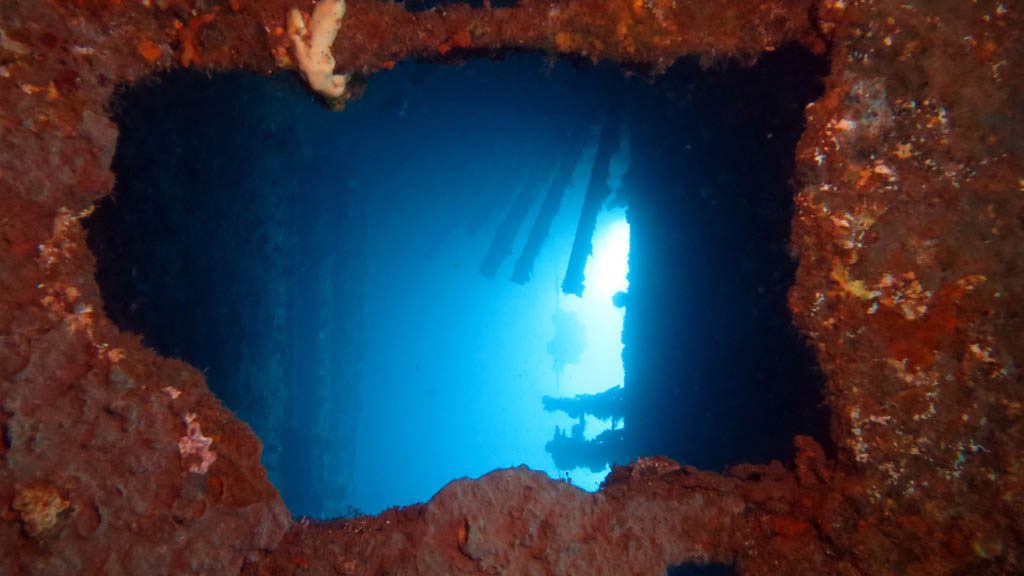 There is some great atmospheric lighting from the vertical shafts of light dropping through the ‘bomb holes’. Definitely a ‘double-dive’ wreck. 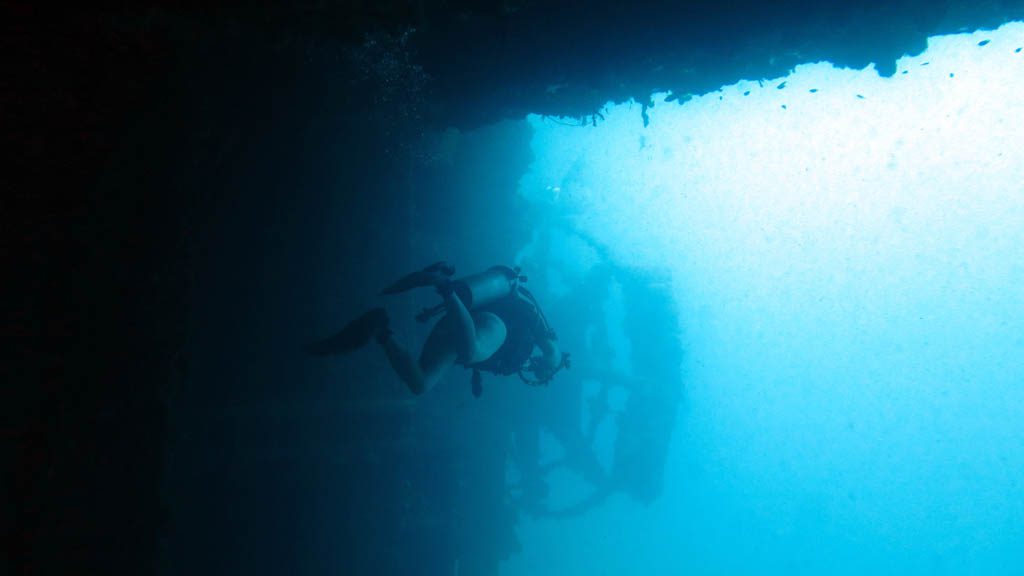 Lunch is served alfresco and without crockery or cutlery (so no washing up!), on a nice little picnic table with benches on Jnari Island, the point of which forms the Grand Central dive site.

Grand Central was almost exactly as I remembered it, the orange and purple anthias at the start, the Pyramid butterflies next, and finally the reef sharks and big silvery pelagics out in the blue at the point. 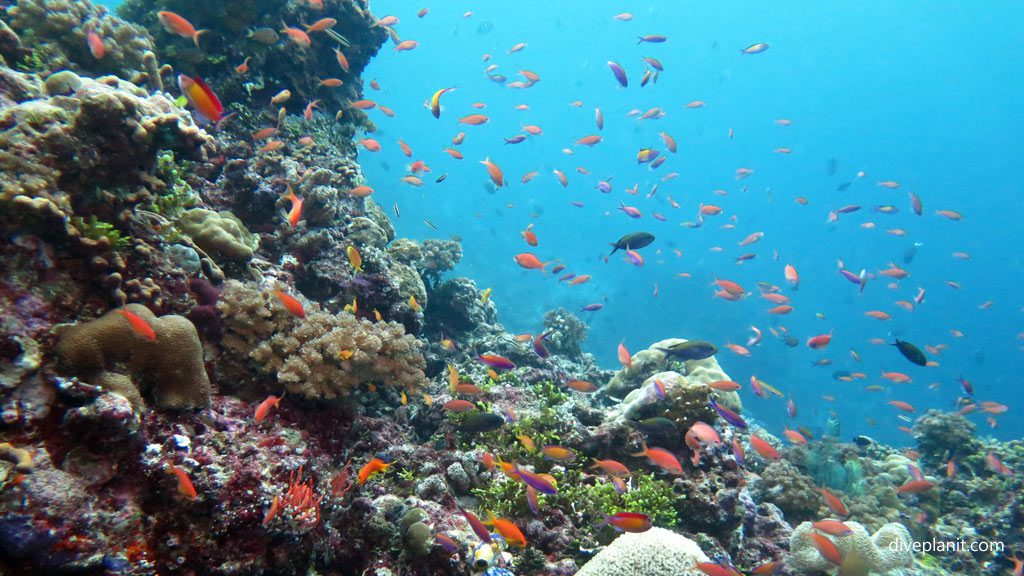 The great thing about diving Gizo is that most of the dive sites are within a 15 minute boat ride from the shop, and within the hour after the dive, the gear has been washed down and were strolling back to the hotel. On the way back we see a learner driver taking their first lesson, with wooden ‘L’s painted bright red and dangling from bumpers both front and rear. The Dive Fest presentation that evening was by Stan Bugg of DAN giving us sensible reminders on how to avoid DCI; followed by hearty pizzas from the Gizo Hotel’s own wood fired pizza oven. 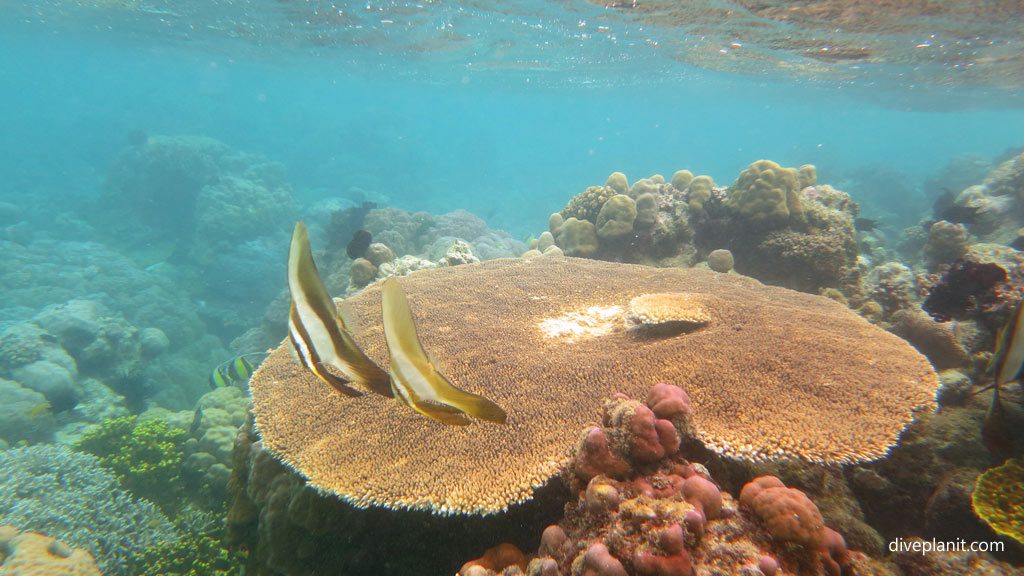 Dive Fest Day Two took us south east to ‘Kennedy (as in JFK) country’ – the islands of Olasana, Naru and Kasolo or Kennedy Island. Each separated by a channel – a mile or so wide, which Kennedy swam and in some cases towed his men across from one island to another in search of water and to avoid capture before finally getting a message to the coast watchers written on the inside of the husk of a coconut.

Now that same island from which Kennedy was eventually rescued periodically plays host to cruise liner guests who barely bother to leave the small bar area to snorkel the reef in front of the island. 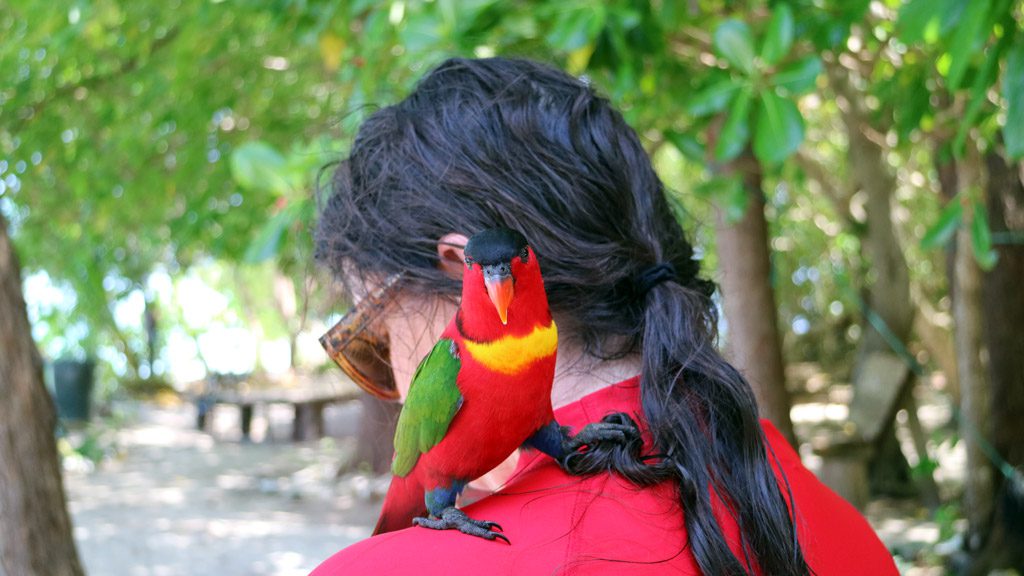 We dived the Pinnacle known for, amongst other things, great gorgonians and fish action on the leading current edge, before enjoying our surface interval on Kennedy Island with a friendly lorikeet.  Our second dive on One Tree (now unfortunately due to climate change ‘No Tree’) Island, was resplendent with colourful anthias. 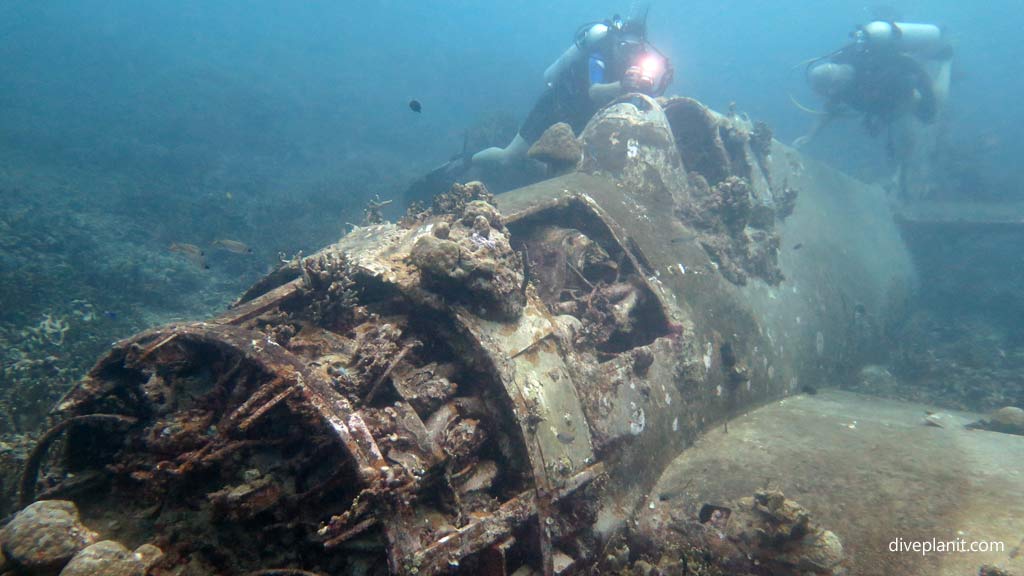 Being on the Dive Fest unfortunately meant that, that was it for Gizo for this time around. Pity, as it would have been nice to call into Fatboys for lunch, or Imagination Island for a beer, or even better, to skip over to the Hellcat which in my humble opinion (being in just 9m of water) is the best air plane wreck dive in the Solomons.

Oh well there’s always next time. And next time I’m coming for at least a week and a treble dive on the Toa Maru! 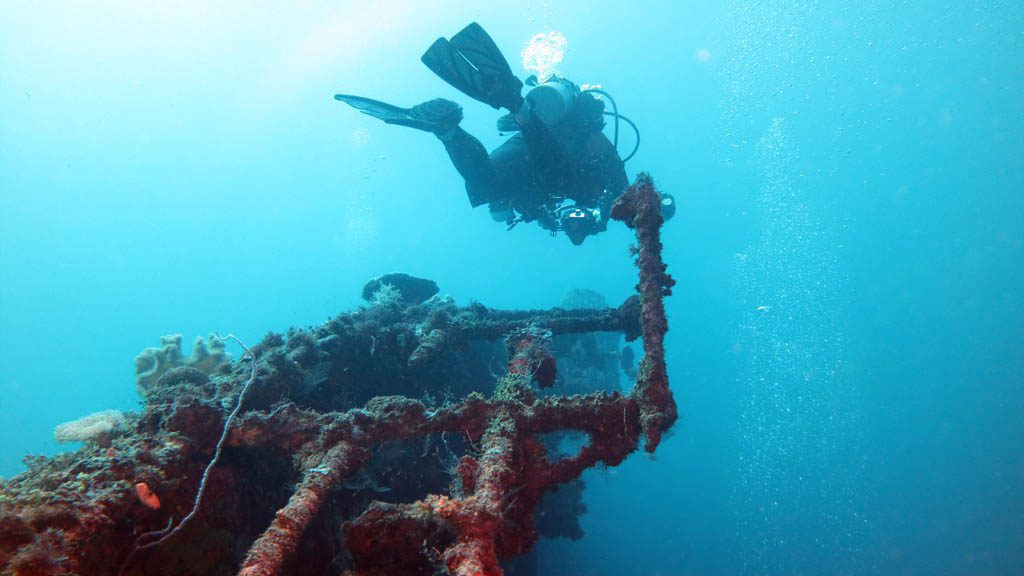 Discovery more about Dive Gizo, and the Gizo’s dive sites.