We’d just hopped onto Makassar Reef in the Komodo National Park, three experienced divers with cameras at the ready, our very experienced dive guide, hoping for some manta action. And Komodo did not disappoint. Fast forward to the end of the dive and here’s who I met (but promise me you’ll read the full story after you’ve watched the video).

The current was running and there were other dive groups around us, all moving at the same speed as we descended. We realised just how fast we were moving once we reach the coral rubble bottom. Strangely not all the groups were moving in the same direction, it was reminiscent of a sci-fi movie like Blade Runner or the Fifth Element where the traffic streams flow in oblique directions in layers one above the other.

Our guide soon had us isolated from other groups, for which I was glad, as at this speed it would have been a) too many of us for one manta, and b) a potential train wreck of multiple dive groups all coming to a halt in the one spot, with literally nothing to hold onto. 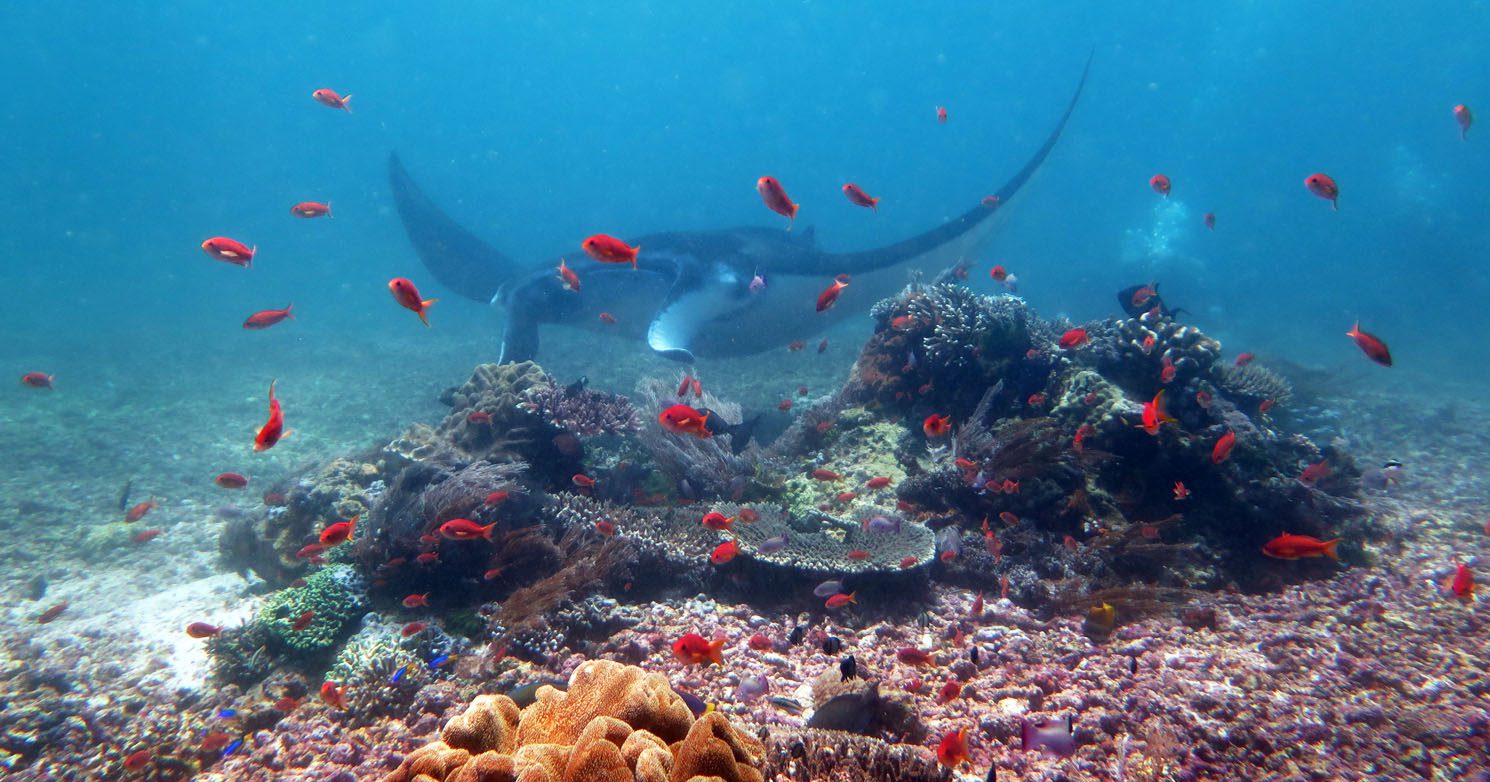 As we sped on through the quite bare landscape, we drifted past isolated coral reef clusters just a few metres wide, beautifully coloured and teeming with fish. Occasionally we throw ourselves into reverse against the current, fin furiously just to hold our ground and grab a few shots, then slowly drift away down current before pivoting round to face forward all the time scanning from side to side to a) keep at least one buddy in sight, and b) try to spot Mantas.

Then suddenly “Ting! Ting!” Our guide, somewhere out of sight ahead of us, had presumably spotted one. But where? Where was that sound coming from?

Engaging full thrust I reverse slowly over the next rise to see divers and the manta to my right. But she was leaving already as there were other dive groups there and all I got was the full belly shot as she cruised gracefully over the top of us and disappeared across the current.

“Ting! Ting!” And off we go again! But within just three more minutes, we encountered another manta actually on her cleaning station, and this time it was just our little group. The current was ripping, but somehow we all manage to hit the deck and hold our positions. Just as the first cameraman went closer for a shot she spooked and retired to another Bommie about 12 m down current and diagonally further over. Three divers went around the back of the cleaning station to approach the other Bommie, but were carried downstream by the current. I waited in the hope she might come back. But it was not to be. So if the mountain won’t come to Mohammed, Mo (well, me) has to go to the manta. 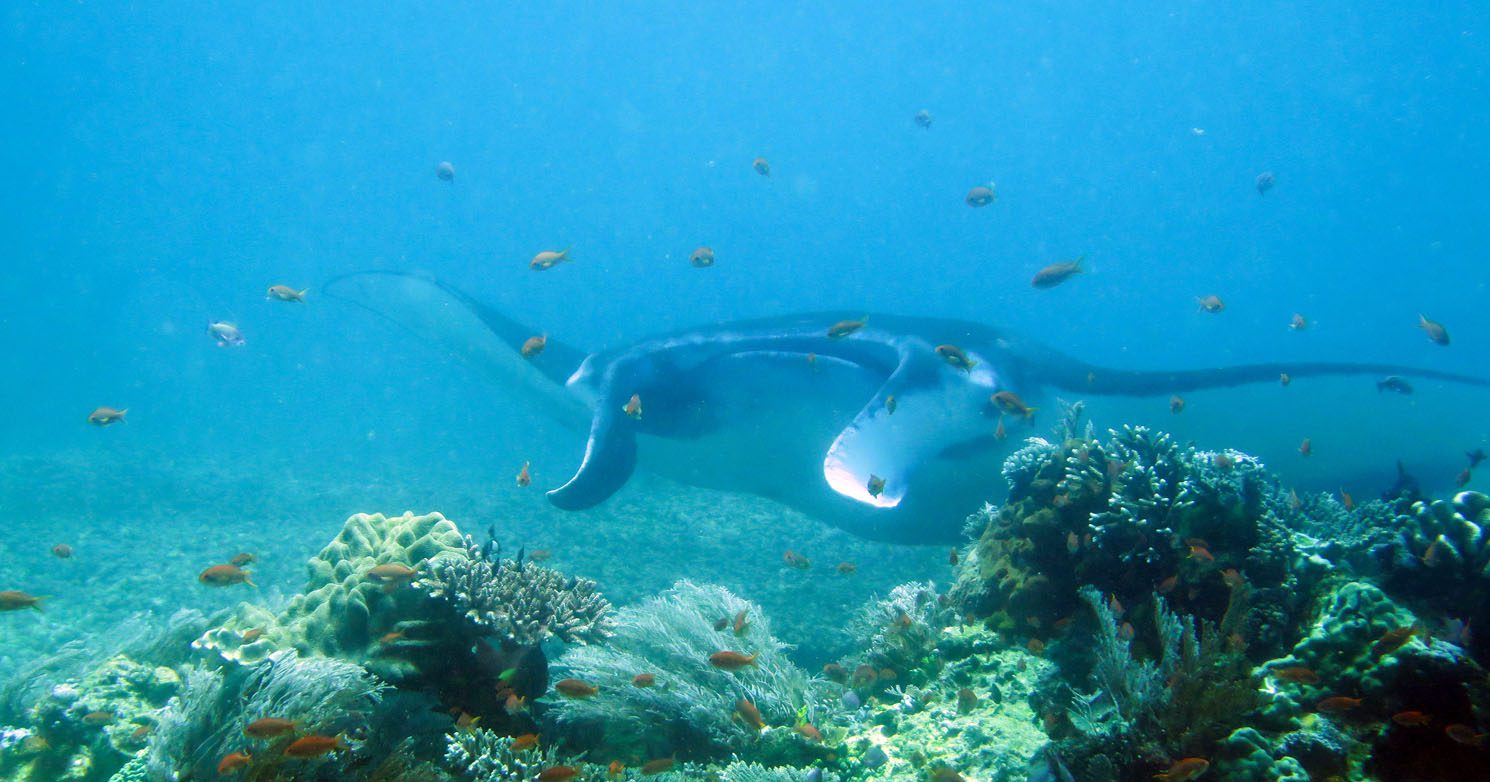 Instead of going round the back of the cleaning station I used all my remaining strength to fight the current and fin around the front which put me between the manta and her cleaning station.

Desperately looking around for something to hold onto I spotted a “Batu Bolong”, a rock with a hole in it (also the name of the dive site with just dived on earlier that day). Serendipitously I slipped my reef hook into the hole and hey presto I could kneel and turn to face my new friend. I don’t think she could see that I was attached, as the hook would have been directly behind me.

Then I started to dance my video lights in her general direction. Mantas are the smartest fish on the planet, with a brain to body size ratio bigger than humans. It said they can recognise people by their eyes alone! And they are as inquisitive as they are intelligent.

Anyway, I think the light caught her eye and she came over to look at this curious figure kneeling with two dancing lights in a current strong enough to rip your arms off. 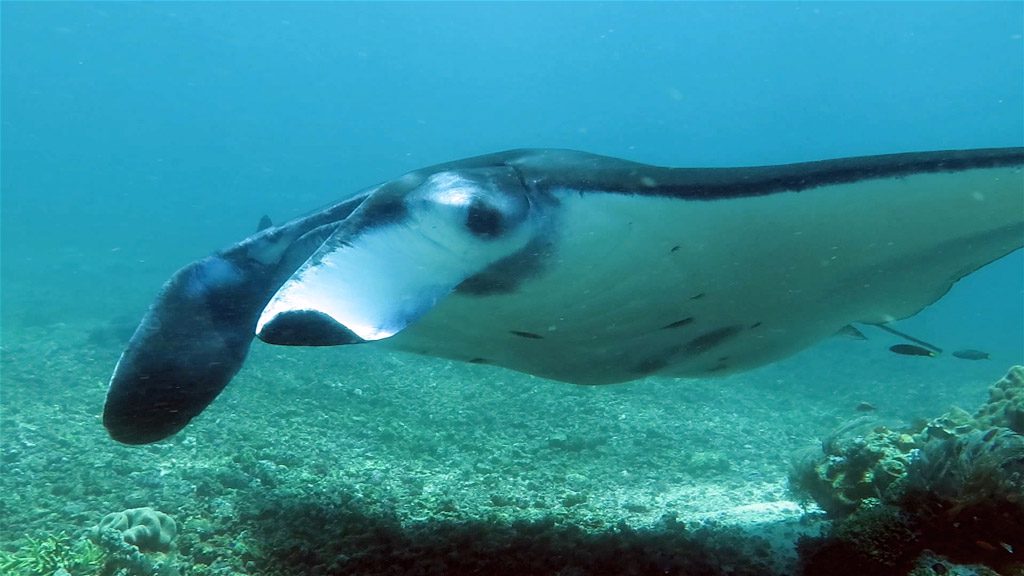 As she approached, I move the camera to my right hand and started doing the Egyptian arm dance (like a snake moving slowly through water) with my left. Halfway through the video you’ll see her curling her mandible closest to me in mimicry. After that I move the camera to one side so we could look each other in the eye…

Finally, it was like “Well if you can excuse me… I need to get back to my cleansing routine…”

So next time you see a manta, try something more engaging than just looking in awe, though admittedly it’s hard not to.

And now you’ve decided you need to go to Komodo and dive Macassar Reef, here’s a travel guide and a few liveaboards that can take you there. Good luck and enjoy.

One thought on “The Makassar Reef Manta Whisperer”

Komodo diving with mantas and turtles 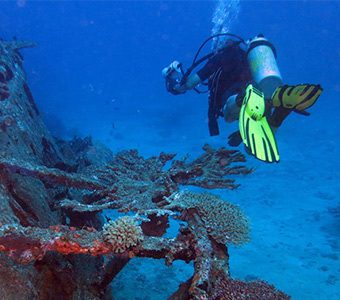