Sustainable Seafood – three things you can do

Home > Blog > Sustainable Seafood – three things you can do

Our global stocks of seafood are rapidly diminishing, entire fisheries are being decimated, and we are turning to new species to eat, as ‘traditional’ species are completely fished out. So what can you, as an individual, do to ensure you are consuming only sustainable seafood?

We were all alarmed by the recent bad news from ICCAT. But how bad was it? And what is ICCAT anyway?

ICCAT is the International Commission for the Conservation of Atlantic Tunas (ICCAT). So that’s OK then – it’s far away in the Atlantic and it’s about tuna. Only it’s not. It’s about sharks, because they’re running out of tuna, and it’s global because the conservation efforts of the EU and US were scuppered by Pacific nations; Japan supported by China and Korea.

Over fishing is a global issue, and it’s all too easy to put it in the ‘too hard’ basket, turn a blind eye, and hope by some miracle we don’t actually run out of fish. It’s also hard for an individual to believe they can make a difference. But a collective of concerned individuals managed to get the super trawlers banned – at least for a period. When ordinary people make informed, collective decisions, it all adds up.

Let’s assume you wouldn’t knowingly eat vulnerable species or species caught in unsustainable ways – those that have significantly high by-catch, which is simply dumped back into the ocean, or destructive fishing methods – such as dynamite fishing or the use of nets that drag along the ocean floor destroying everything in their path.

The first problem is the not knowing, and often the second is simply because we don’t ask.

Support the campaign for better seafood labelling  – without it we cannot make informed choices. * Please note that this league table has the worst brands at the top of the list: contrary to advertising John West is absolutely not the best but the worst brand you could select.

Yes, you can make assumptions, like the shark fin in your shark fin soup is probably not a sustainable option. Or the flake/fish-of-unknown-origin in your fish and chips is shark – and most species of shark are now classed as vulnerable. And finally, the further away it came from, the less sustainable it is.

But the best option is to ask.

Whatever you are feeding your family with – you are entitled to know where it has come from. It doesn’t matter whether it’s at your local fish and chip shop, the fish counter at the supermarket, or at that fancy restaurant. Ask: “Is this fish sustainably caught?” Most importantly, if you do ask, you must respond accordingly. If you get a non-committal response and say “I’ll have it anyway” it sends the message that you don’t care either. If in doubt, take your business elsewhere – they don’t deserve it.

If, like me, you’re from Anglo-Saxon stock, there’s always a reluctance to make a fuss. You can  get an App for that – specifically the Sustainable Seafood Guide from the Australian Marine Conservation Society. Like Diveplanit App’s Fish ID, it doesn’t list every fish, but it will go a long way to helping you make an informed decision when you’re standing there at the fish counter. So in fact, as an individual, you do have the power to get informed and make responsible decisions and informed choices. In Australia, we are still uniquely positioned to manage seafood stocks sustainably, but only if we act responsibly and keep our suppliers, and the government honest. Let’s make every effort to do so. 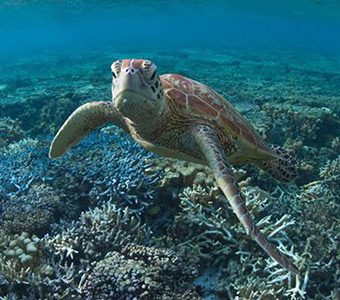 Where to see turtles on the Southern Great Barrier Reef