In the past month we have seen a baby dolphin and three young whales caught on shark control equipment in Queensland. The poor dolphin was critically injured with a drumline hook through its side, two whales were thankfully released and one drowned.

This cruel by-catch, along with some recent encounters with politicians, have left me feeling like there is a huge amount of misunderstanding about the government’s shark control policies here on the east coast.

We’ve been culling sharks in my home state of NSW since the 1930s, and thousands of animals are still killed every year in our beach nets.

So I thought it would be useful to share some FACTS.

How do shark nets work?

Shark nets are NOT a barricade, and don’t prevent sharks from getting near the beach. They are simply in place to entangle and kill sharks if they happen to be passing by (along with any other large marine creatures that might be passing by). 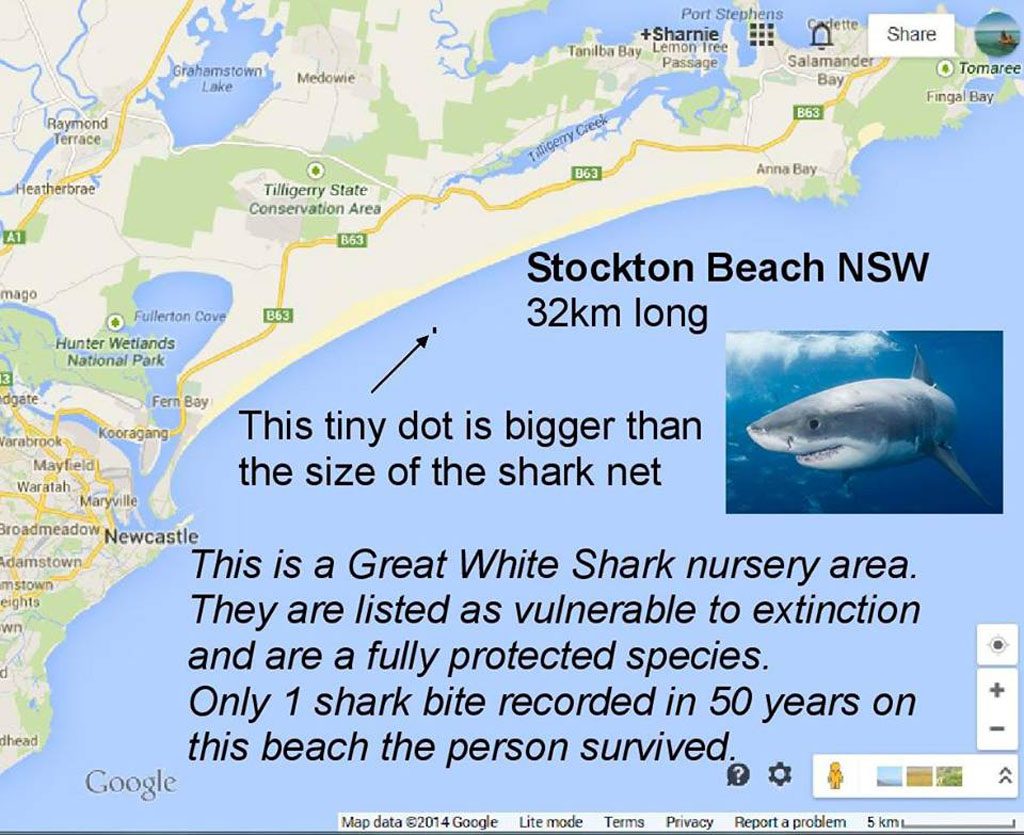 They are 150m long, 6m tall and usually set in about 10m of water – allowing sharks to swim over and around. They also are only in the water for 9 months of the year, and only 14 days in each month – so a lot of the time they’re not even in place.

Are they protecting people?

There is no science that proves categorically that the nets make our oceans any safer for beach-goers.

In fact a 2009 government report stated that ‘the annual rate of shark encounters was the same both before and after meshing commenced’. While the number of shark fatalities has decreased since the nets were put in the water, this is due to improved medical assistance and not to the nets.

Are they harming wildlife and ecosystems?

Yes. Shark nets in NSW have killed over 15,000 animals. Over 100 species have suffered, including endangered species such as turtles, dolphins, dugongs, rays, seabirds, harmless sharks and rays. 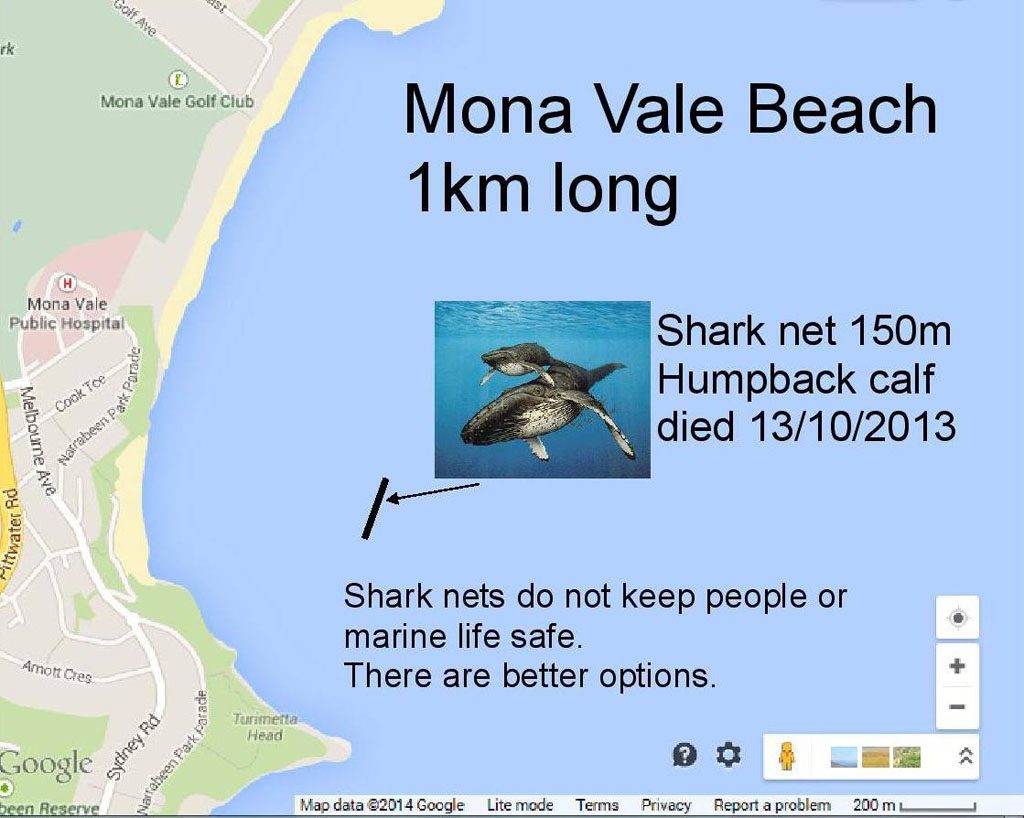 Last year a baby humpback drowned in the nets a few beaches from where I live, while its mum watched on, and just last month a baby humpback whale died in shark nets off the Gold Coast. 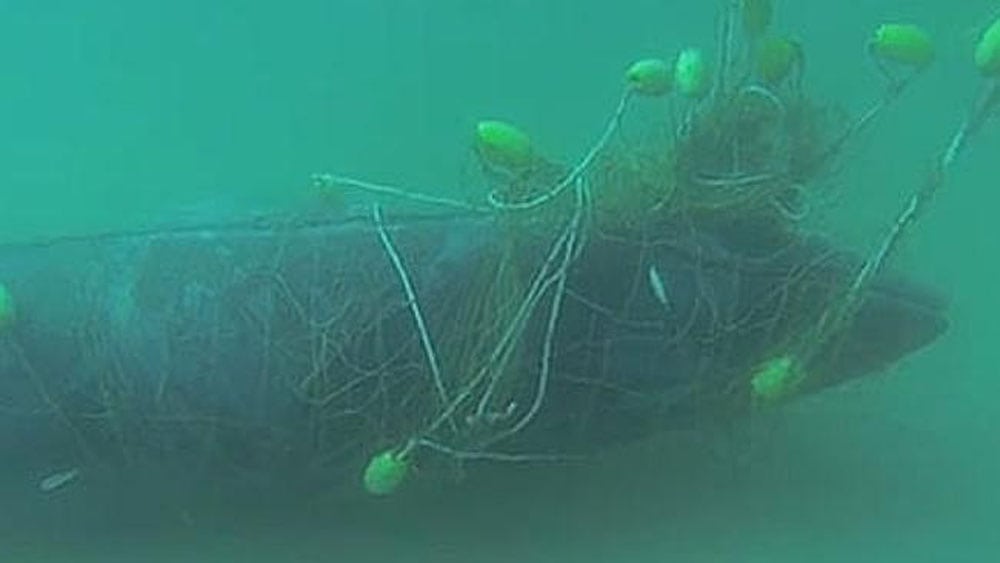 Just to clarify, these deaths are not a trade-off for the protection of people, but are unnecessary deaths in an out-dated system that doesn’t protect anyone.

Is there an alternative?

Yes. Recent technological improvements that are based on our increasing understanding of how sharks behave have provided us with a range of superior alternatives.

For example, there is the eco shark barrier, which provides an actual barrier, without the threat of entanglement.

Or there’s the clever buoy, which detects the size and movement patterns of sharks and alerts lifeguards in real-time.

But am I going to get eaten by a shark?

However we all take a calculated risk whenever we enter the ocean – something could go wrong, as it could anywhere in life. If a shark does bite you, you’ll probably just end up with a rad scar (they don’t eat us, despite what you may have seen in Jaws).

At the end of the day, I think we should just accept that the ocean is where sharks live, and we’re entering their territory when we’re in the water – and the territory of all the other ocean creatures.

After all, that’s one of the things that make the ocean so great!

Can I do anything to help get rid of the nets and drumlines?

Join local Facebook groups like noNSWsharkcull, or nation-wide groups like Sea Shepherd who are actively running campaigns to replace the nets and drumlines with alternatives that protect people, while not harming other animals.

Sign this petition on Change.org created by the organisation Humpbacks & High-Rises, which appeals to the Queensland Minister for Fisheries to remove the nets on the basis that the waters in southern Queensland are used by migrating whales (many with calves) as a resting point.

Operation Apex Harmony, Sea Shepherd’s shark defence campaign, was introduced recently with the launch of a new merchandise range, with proceeds contributing to the campaign.

Later this month there will be screenings of the Sea Shepherd documentary; The Shark Cull around the country. The documentary exposes the brutal cruelty of the controversial program that took place off the WA Coastline last summer. Check the website for details of screening dates and venues. 2 thoughts on “Some facts about shark nets”

Looking after the Solomon Islands