Munda is different from other dive destinations in the Solomon Islands in that it’s actually a little town rather than a dive resort, so during the hours you’re not diving there are places to explore and get a feel for how the local Solomon Islanders live.

Of course, the diving is spectacular, you can be assured of that: walls, reefs, wrecks and points where currents converge and pelagics cruise. The recently refurbished Dive Munda dive centre – still based at Agnes Gateway Resort – can take you to all the well-known sites: Munda Reef near Skull Island and Shark Point. The Reef is teeming with little reef fish while the Point attracts clouds of yellowtail scared, midnight snapper and barracuda, and occasionally something bigger looking for a feed. Skull Island is well worth a visit too, though this is best done as an organised tour, separately from diving. As you can imagine, it’s a sacred place and best seen with a guide who can tell you a little of the history and explain the stories behind the skulls and the three stones erected to the three spirits. After you’ve dive the reefs and walls, you’ll probably want to do some of the wrecks. The most interesting, in that they still look very much like what they are, are the two aircraft wrecks the Airacobra at 27 m and the Dauntless at 12 m. All their constituent parts still intact and both clearly visible from the surface, there’s something uniquely SCUBA about flying down to a plane sitting on a sandy bottom and being able to look down on it from all angles as you hover around it. If you’re interested in WW2 history in general, there is also the Peter Joseph WW2 Museum in town which has everything from field guns to handguns; and an interesting local, called Alfie, who has reassembled a completely working WW2 jeep from parts simply abandoned in the jungle 70 years ago – and discovered and re-used by Alfie. (They don’t make them like that anymore!) Other Activities include game fishing out of Zipolo Habu Resort or a sunset cruise. There is a Go West Tours desk inside the Agnes Resort, where the newly refurbished Dive Munda is situated.

You can also enjoy local culinary delights as well as South Pacific cuisine such as the local kokoda inspired by the Fijian dish. The resort also has its own bar and the Vita Valusa, a great little terrace where you can watch the local islanders come and go from the market next to the resort in their boats seemingly overladen with produce and people. Two other establishments not to be missed out on are the Leaf House Cafe, just behind the Agnes Resort (– though don’t turn up late for a late lunch, the food is so good it goes quickly!) And, if you’re in Munda on a Friday or Saturday, the Cava Bar, another place on the waterfront serving authentic Cava, another Fijian influence, prepared with customary deference at your table. 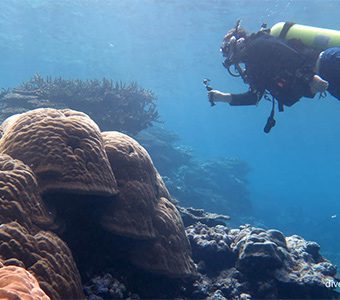 Why does American Samoa have such great diving?

What is remote diving? We asked DAN AP