It’s Shark Week, and we thought to celebrate these magnificent apex creatures, we’d take a look at the many shark attack myths that get everyone so excited every time Shark Week comes around. Shark lover Nigel Marsh sat on a panel of experts recently to discuss the topic.

A great majority of the population are terrified by sharks and believe they have a real chance of being attacked by a shark each time they enter the ocean. This fear sadly stops many people from swimming in the ocean or learning to scuba dive. But a fear of sharks is mainly based on misleading portrayals of sharks in horror movies, overdramatised documentaries and the sensationalised reports of the mainstream media.

I have been diving with sharks for over forty years, and I still have all of my limbs attached. I, like most divers, have grown to love and admire sharks, and coming in contact with thousands of sharks, I have learnt that they are not mindless killing machines, man-eaters or monsters, but an important part of a healthy marine ecosystem. I love sharks so much that I travel around the world to dive with them and last year produced a book on the best places to see sharks called Diving With Sharks (available in book shops now).

Because of the book, I was recently invited to be part of a panel discussing sharks and shark attacks at the Byron Bay Community Centre. Also on the panel were; Dr Daniel Bucher, Associate Professor: Marine Ecology and Fisheries at Southern Cross University and two politicians representing the Greens, Peter Whish-Wilson and Tamara Smith. Over the course of the evening we discussed a number of shark topics, answered questions from the audience and debunked the most popular myths concerning sharks… Myth 1. All sharks are dangerous. There are over 500 species of sharks, of which only a dozen are considered potentially dangerous. In fact, most sharks are completely harmless. The great majority of shark species are less than one metre long and most have teeth that are only a few millimetres long. Most sharks are also very shy and wary, as they are preyed upon by their larger cousins and other ocean predators like seals, gropers and even killer whales. Myth 2. The shark population is exploding. According to the media, and some fishermen, the oceans are shark-infested and shark numbers are exploding. As a diver I would love this to be true, but the truth is many shark species are in decline, and some are on the threatened species list as their numbers have been decimated by fishers.

Sharks are apex predators, and just like their counterparts on land, the big cats, their population is very small compared to their prey and they only have a small number of young. It doesn’t take much for their numbers to fall out of balance, and unfortunately this has happened with many shark species being slaughtered in their millions by fishers for their fins and others being killed by beach meshing programs. One only has to look at the number of sharks captured in beach meshing programs over the years to see there has been a steady decline since they were first installed. Myth 3. Sharks target humans as prey. Humans are not prey for sharks and if we were no one could safely enter the ocean. Sharks generally don’t eat people, and most shark attacks involve a single bite. Most shark attacks should more accurately be called shark bites, with the shark taking one bite, either accidently or to see if the person is potential prey. If the shark was trying to eat the person they would keep on biting, but in most cases the shark only takes one bite and swims off when it realises the person is not its normal prey. Unfortunately, one bite from some shark species is enough to maim or kill the poor victim.

Scuba divers are rarely bitten by sharks, even though they come in contact with more sharks than any other group of ocean users. It is thought that sharks see scuba divers as another large predator, so they are wary of us, and the only way that many can be lured close is with the use of baits at popular and well-organised shark feeds. Myth 4. The rogue shark theory. It was once believed that a shark would get a taste for human flesh after a shark attack and would then attack other people. This theory is still used by authorities as an excuse to slaughter sharks after an attack. The rogue shark theory was disproved long ago, as most shark attacks involve a single bite and no attempt to eat the victim. Occasionally a series of shark attacks can occur in an area over a short period of time, such as happened in Cid Harbour in the Whitsundays last year. Why this occurs is still not known, but Cid Harbour is a known bull shark habitat with murky water, and an area that the locals avoid swimming, unfortunately all the victims were tourists. Myth 5. Shark nets prevent shark attacks. Sharks nets or beach meshing are mainly used in Australia and South Africa, and involves a series of nets set off a beach to kill sharks. These nets don’t cover the entire beach, and are set several metres below the surface and several metres off the bottom. They don’t actually stop sharks reaching the shallows where swimmers are, and most sharks get entangled when heading back into deeper water without any contact with swimmers and surfers. These nets don’t prevent shark attacks, they are installed to cull shark numbers, and they have been very effective in doing this. However, they also kill turtles, rays, seals, dolphins, dugongs, whales and most of the sharks killed by these nets are harmless species. In reality you have just as much chance of being bitten by a shark at a beach with shark nets as one without nets. In Queensland a number of shark nets have been replaced with baited drumlines. While definitely better than shark nets, as they kill less innocent marine creatures, they still kill sharks, including many species that are critically endangered. There have been several reviews by state governments on the removal shark nets, but with people and politicians still paranoid about sharks, and losing votes, these killing devices are set to remain. A number of other devices are being looked at to make beaches shark free, such as eco-barriers, but none of these have worked successfully. Eliminating the risk of shark attack on ocean beaches is almost impossible, they are going to happen no matter what governments do. It is simply a risk people have to accept when they enter the ocean, the shark’s habitat. However, that risk is extremely low, each year around 80 people are bitten by sharks and around five people die. More people die from bee stings, dog attacks and even cow attacks, and these unfortunate people never make the news (as someone that is allergic to bee stings, and having almost died from a sting, I can tell you I fear bees more than sharks). Sharks have far more to fear from humans, as we kill around one hundred million of them each year to supply the Chinese demand for the horrible and tasteless shark fin soup. 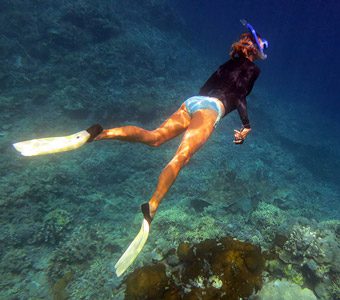 Best snorkelling in the South Pacific 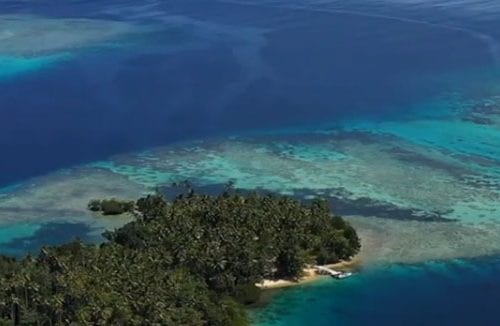