Swim With Whales This Year – The Best Season Ever Kicks Off

Just one month into whale season and it looks to be one of the best ever, not just for whale watching, but also for swimming with whales.

Sunreef Mooloolaba’s Dan Hart said, “So far this season, we have had more successful swims with the whales than ever before – it seems there are more whales and calves around for this time of the season – and they seem more curious as well.”

The Sunshine Coast dive centre launched its Swim with Whales experience in 2014 and it has been growing in popularity ever since, being more accessible (and affordable) to most East Coast Aussies than Tonga – where operators have been running whale swim experiences for some time. This year, more than 24,000 humpbacks are expected to make the migration north from Antarctica. After eating up to four tonne of krill and small fish a day each in the Antarctic over summer, the Humpbacks are migrating to the warmer northern waters which provide perfect temperatures to give birth to their calves in the sheltered waters of Queensland’s coastline.

“It’s always hard to describe such an awe-inspiring experience – nothing can describe the feeling when you are just metres away from these animals, and they look you straight in the eye – but I can tell you it’s amazing and unique every time, and something people will remember forever,” says Dan. “We have had some just incredible encounters so far this season, and already we are seeing mamma whales with their calves as well, and the reactions from our guests have been great,” he said.

“Everyone is so awestruck.  We see the whales from the surface, and then you will hear the swimmers squealing excitedly through their snorkels as the whale swims past, or under them in the water – it takes your breath away every time!” Meanwhile, on the other side of Australia on the Coral Coast, operators have begun a 4-month trial of swimming with whales in Coral Bay and Exmouth, with immediate interaction success in both locations. Eleven tour operators from the Ningaloo region are participating in the trial, with about 200 people booking tours in the first week alone. The world’s largest humpback whale population, numbering around 30,000, migrates annually along the Ningaloo Reef. Exmouth Dive Centre crew member, Patrick Horgan, said this of his whale interaction experience earlier in the week:

“The suspense was continually building as the whales slowly approached us. Time stood still for a moment. I could not believe that I was finally swimming with a humpback whale! We watched for a few moments before the whales slowly roused and swam off at a relaxed pace.” Their marketing manager, Sonia Beckwith, said; “It’s an adventure, an expedition of sorts, and we don’t know what we will find, or in this case, if every pod of humpback whales we spot will want to interact.”

Operators on the East and West Coast all operate under a strict Code of Conduct, with the number of swimmers in the water at any one time, strictly limited.

According to Dan Hart; “Sunreef provide a full briefing on what to expect and safety procedures as well as providing all required equipment.

“Once a whale is sighted, the boat will be put into neutral 100m or more away from the whale, and if the conditions are determined safe by our trained crew, swimmers will be allowed into the water with a guide and a floating line attached to the boat for safety.” 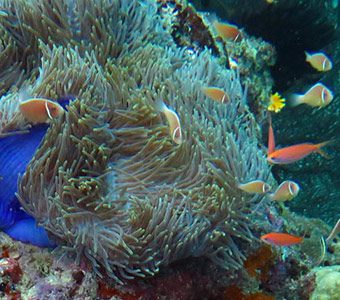