The Cathedral Shark Dive operates on MONDAY, WEDNESDAY AND FRIDAY (or by special request).

The Cathedral Shark Dive is better known as Fiji’s Tiger Shark Dive. The site usually has a very high probability for tiger sharks, with the operator claiming you would be unlucky not to see one on a dive. There is a briefing on the evening before the shark dive so that guests know exactly what to expect, and can ask all those questions, which seem a bit last minute if you ask on the boat when you’re half way there.

Before entering the water, the dive crew review the safety rules and divers either freely descending along the reef contour, or along one of the ascend/descend lines – directly down to the ‘stone wall’.

The feeders place some fish loins and bones in the water to attract the sharks and then fill a big box with fish and lock it. The box is nicely rounded so that the sharks do not hurt themselves when rubbing against the box. Now the sharks can see, and more importantly smell, the food. Small fish start to feed on the scraps in the box and attract even more sharks. Some of the sharks try to get their snacks from the box. Guests get to observe all the action quite closely, but from safely behind the stone wall. From time to time, one of the feeders will take a fish head (big tuna heads) and lay them out in the space between the feeding bin and stone wall to draw them closer to the observers. The idea is to ensure the sharks are not frustrated by attracting them with food without actually giving them something to eat.

After about 40 minutes (on Nitrox) divers slowly make their way back to the reef and ascend to the reef top for a safety stop with lots of small reef fish, sometimes turtles swimming by and napoleons cruising through the clear, blue water. After the surface interval, the second of the double dives follows a similar pattern. Feeding wild animals is a very controversial topic, and leads to the questions: “Are we altering the sharks’ behaviour?”, and “Is this a good thing?” The answer in our opinion is “yes” to both. Though there are probably sharks patrolling Beqa Lagoon daily looking out for scraps of dead and diseased or degraded fish, clearly, laying out food that attracts sharks will bring more sharks into an area. But they are not being hand fed, over fed or fed each and every day. So the change in behaviour is minimised. But is it a good thing? Or a circus act for our entertainment? Experience promotes understanding, and every diver that visits this site takes home an experience that renders them a shark ambassador – an urgently needed protector of these wonderful animals. So from that perspective alone – we believe it’s a good thing. But the only way for you to know for sure is if you go and experience it for yourself! 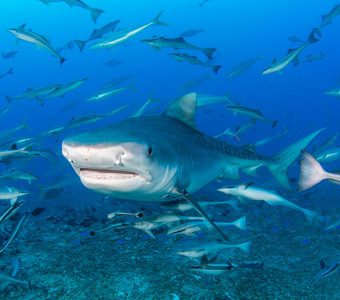