Christmas Island’s Million Dollar Bommie is 7m high and lots of great fans around the bottom and underneath the over-hangs. It is also home to a wide variety of fish both on top feeding on the algae on the colours in the sunlight, and in the nooks and crannies all around.

Here is a short video of the stunning fish life you’ll see around Christmas Island.

Between the cliff face and the start of the dive it’s a sand and rock bottom which is actually quite unique for Christmas Island as usually the coral grows almost all the way to the surface. The bommie is about 6 to 7 m high on a 26 m base and lots of great fans underneath it. Great for fish photography, especially on the top of the bommie where the light is good. There are lots of places where the fish will swim into the reef only not to reappear on the other side! Like this Meyer’s Butterflyfish, tricking us with a left turn below the coral. At other points there’s no such exit and you can get a fish in the enclosed space which, once they’ve got used to the additional light, will stay still long enough for a good shot. Like this Pigfish – but not sure what flavour – somewhere between a Lyretail and a Diana. And this Mimic Surgeonfish: but actually he’s a real Surgeonfish – so who’s he mimicking ?? There was a tiny Red Fire Gobi who has an ability to sit perfectly still while you frame him up and then appears at another spot out of frame about 23 cm away again perfectly still and stationery just as you press the shutter. There was also a mystery fish hiding under a rock which appeared to have two lines down its face but on further reflection and examination the photos turned out to be simply a coral trout. We hopped in for a snorkel between dives and were lucky enough to see a passing manta. Fish diversity in a single shot you have: (left to right): Goldspot Seabream, arc of Fusiliers, Weber’s Puller (a damselfish), Whitetip Soldiers, (backend of) Velvet Surgeonfish, Indian Ocean Trigger (bottom) and finally a Coral Rockcod. And notice how they all play nicely together – maybe we should have fish running the UN.

Finally one of the easier sea creatures to photograph … the stunningly exciting Sea Cucumber. Favourite partner at the ‘Under the Sea’ graduation disco. 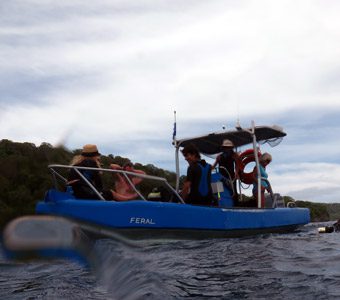